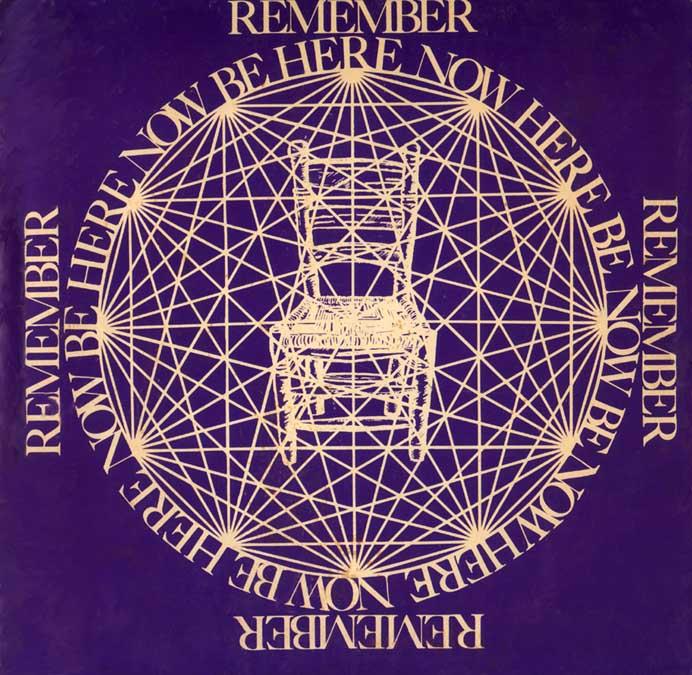 This post is by no means a book review! It is only to marvel at how when something is not for you and does not resonate with you, it is not meant for you. And isn’t that funny? Isn’t that interesting? Or sometimes, it may just be a matter of timing. For instance, you may be into something now that you once came across before, yet dismissed. Now, you “get it” and are totally into the very thing you once shrugged off.

More than a few times, I have picked up Be Here Now by Ram Dass, and it hurt my head and mostly, my eyes. I simply could not follow it. Too much going on graphically in my opinion. Yet so many people reference it as having had a profound effect on them! And that’s what makes me reconsider and say, “Really? Hmm…let me revisit it.”

Tonight was one of those times. A friend recently saw the Steve Jobs documentary (The Man in the Machine) and mentioned that that book came up in the film. Again, here is this book that is credited as being a spiritual catalyst. How?! So I re-checked it out on Amazon, and to my surprise, there was actual text on the pages this time. I could have sworn when I looked at it in the past, every other page was a different color, with all kinds of wild fonts, with a majority of the text written in circles much like the cover. However, the majority of the pages I scanned (in the preview) was readable.

Then I checked out the book reviews. As of tonight, it has 468 reviews, with close to a 5-star rating. Based on the reviews, most people a) were able to read it and b) were profoundly changed by it. Then there are a few reviews like this one:

Hahaha! I laughed when I read that review — validation that I’m not the only one who had a similar reaction at first glance. It’s been ten years since I first picked up this book, and I’m just now able to even read the words on the pages. Progress, right? No — no one book/teaching/path is for everyone of course.

Though I still haven’t read Be Here Now in its entirety, I can see that what this book is for so many is what Autobiography of Yogi is to me (and so many) — an eye-opening revelation of a different way to live and be.  The right book can really open up a whole new world, especially when one is spiritually searching. It’s not just about reading something “inspirational” or “spiritual,” but about realizing that higher states of consciousness exist and are attainable…because others just like you have reached them. Whatever state you’re in that’s causing you to seek more — there’s always hope that you don’t have to stay in that state. Books like these are harbingers of good news in these ways.