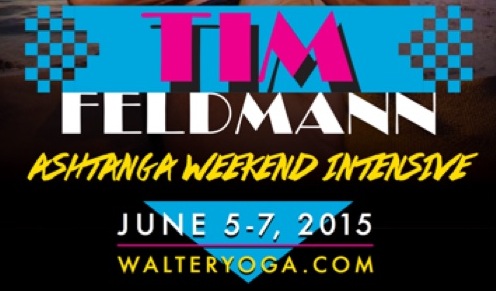 I attended my first hatha yoga intensive this past weekend. It was led by Tim Feldmann in the Ashtanga style.  We focused on ujjayi (fire) breathing, bandhas, arm balances, headstands, leg-behind-head poses, and backbends, as taught by Ashtanga guru Pattabhi Jois.  Guruji, “my guruji” (Paramahansa Yogananda), says this kind of complex stuff is not necessary!

Patanjali teaches that any posture that keeps the spine erect is good for meditation, yogic concentration on God. It is not necessary to go through physical contortions or to practice exercises requiring extraordinary physical endurance and suppleness, as is advocated in Hatha Yoga.  – Paramahansa Yogananda, Man’s Eternal Quest (p.19)

I strive to follow my guru above all, but I’m very much attracted to hatha yoga. Yoganandaji suggests that there is no conflict (with following the SRF teachings), like if you just want to practice hatha and are suited to it, do so. He even taught hatha (in addition to kriya yoga) when he first came to the U.S. Later, he developed a set of pranayama exercises (called “Energization Exercises”), which also calm the body and mind — the true, higher purpose of practicing asanas — and are much quicker and easier to perform. There are still some SRF temples that offer hatha, such as Lake Shrine.

What attracts me to Ashtanga in particular is that it has a guru at the head (just as Bikram and Iyengar yoga do). The concept of practicing a yoga with a lineage is something that resonated with me when I read it in Bikram Choudhury’s Bikram Yoga. The idea is that you can trust you are practicing something that works and leads to some level of realization when it has been tried and proven true throughout the ages. Yoga is challenging! To think that I’m not getting the maximum results or causing damage because the asana is not quite right or, worse yet, it’s not even considered an asana….forget about it!

I found Bikram too hot and Iyengar too mechanical. Ashtanga has just the right amount of flow, with a reasonable room temperature. The heat of Bikram is generated internally in Ashtanga through the constant ujjayi breathing throughout the series. A series, yes!  Ashtanga has a certain level of purpose and seriousness to it, in part due to the series. There’s a definite progression, as one works through the primary series and higher, so I feel like I’ve accomplished something from one practice to the next.

Loyalty-to-my-path-wise, I felt fairly comfortable practicing Bikram, with the guru (Bishnu Ghosh) being the brother of my guru. Iyengar…well, I didn’t practice for more than a month…just didn’t get into it, but it seemed purely physical and mechanical, no spiritual element to it at all. But Ashtanga, with its kriya-like ujjayi breathing, opening/closing chants,  and a guru, makes me question practicing it regularly (the recommended 6 days per week). Is it disloyal to my guru to practice? Am I interfering with my kriya yoga and meditation practice? Do I need to practice Ashtanga? No. It takes some time and effort to learn Ashtanga yoga and practice it correctly. I’m still learning the primary series at this point and have nowhere near a 6-day per week practice. I don’t get too much into the theory, observances (like Moon days), or even the chants. So I don’t feel too conflicted in taking Ashtanga classes or practicing it at home. I do wonder if I’ll reap the full benefits without diving fully in, but I know that all my guru has provided is enough.